You are here:
HomePRINCIPLE OF TRADEMARK EXHAUSTION 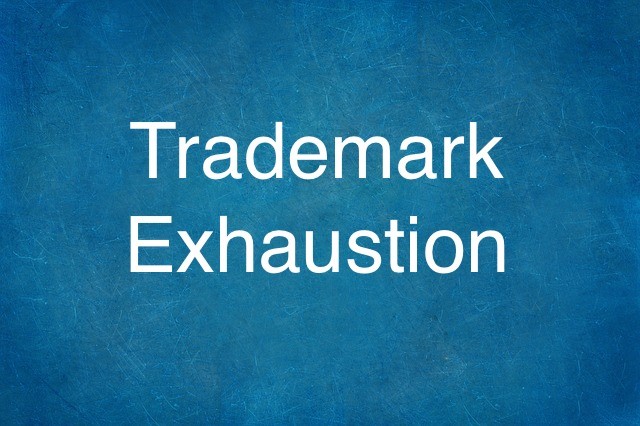 A trademark right is typically exhausted by the first sale of goods or placing the same in the market. The basic principle is that once the right holder has been able to obtain an economic return from the first sale or placing in the market, the purchaser or transferee of the goods or services is entitled to use or dispose of them without further restriction. Exhaustion of rights is linked to the distribution right. The right to distribute objects means that such objects are released by or with the consent of the owner as a result of the transfer of ownership.

The doctrine of Exhaustion basically means that an owner of a particular good ceases to have control over the further sale of his goods once he has made a valid transaction of sale. In other words, if the trademarked goods are once put on the market by the owner or by his consent, and once purchased legitimately, the trademark owner or anyone deriving his title from him cannot prevent the sale of such good, as the exclusive right to sell goods bearing the mark is ‘exhausted by the first sale; then the exclusive right to sell goods bearing the mark cannot be exercised twice in respect of the same goods. Hence, this doctrine is otherwise called the doctrine of the first sale. What’s more, there are different modes of exhaustion as well, which are recognized internationally.

Where the goods bearing a registered trademark are lawfully acquired by a person, the sale of the goods in the market or otherwise dealing in those goods by that person or by a person claiming under or through him is not an infringement of a trade by reason only of

a)…………………..
b) the goods having been put on the market under the registered trademark by the proprietor or with his consent. Section 30 wording is wide enough to subsume both national and international exhaustion principles. Section 30 (3) provides that the general legal proposition that once certain goods bearing a registered trademark are lawfully acquired by a person, the subsequent sale of the goods in the market or otherwise dealing in those goods is not an infringement.

The principle of exhaustion of rights is been dealt with in the case of Samsung Electronics Company Limited & Anr. Vs. Kapil Wadhwa & Ors MANU/DE/0571/2012. wherein the different benches of High Court have taken different stands of this concept and the matter is still pending in the Supreme court for the final verdict on the issue.

A brief overview of the matter:.

In this case, the plaintiff is a company that makes printers under its trademark and has licensed the use of the Samsung trademark to its Indian subsidiary, the plaintiffs have stated that the printers sold in India by them are sold through the authorized channel of resellers and partners of the plaintiffs. Any third party who is not authorized by the plaintiff cannot legitimately sell or advertise the Samsung products in India. In the plaint, it was also stated that the advertisement of the products is through website namely Samsung.com/in, through which they intend to educate the customers of their varied range of products etc.

Defendants on the other hand are the company engaged in distributing, retailing, and selling various types of computer hardware as well as peripherals. The defendants also have a retail outlet. They are importing the printer and selling it in India at the price lesser than the MRP of the printer manufactured by the plaintiff company.

Plaintiff challenged the said act of the defendants on the basis that the act of defendants of importation without the consent of the registered proprietor would amounts to infringement of its trademark.

Defendants on the other hand argued that the plaintiffs have suppressed a material fact that defendants are importing and selling the genuine, original unaltered SAMSUNG printers which have been purchased and imported through the legitimate channels. Defendant said that no change in the condition of the printer is done also they counter the act of infringement saying that they are doing parallel import which is permissible under the law and would not amount to infringement. The Delhi high court after hearing both the party held that the claim of the plaintiff is justified because the law does not give any unfettered right of importation of goods under the mark. On the other hand, the court supported the plaintiff and said that in the normal course, the act of importation without the consent of the registered proprietor amounts to an infringement. Section 29 clearly put barriers on importation and had there been such a legislative intent to remove barriers on imports or exports and to promote free commerce under the goods of identical trademarks, Section 29(6) ought not to have provided for the acts of importation or exportation as use of the mark for the purposes of Section 29.

Section 29(1) read with Section 29(6)(c) of trademark act 1999 in explicit terms restrict the free flow of goods. Court interpreted the Section 30(3) and Section 30(4) and said that these sections operates in the domestic market and the same cannot be said to be relating or introducing any such concept of international exhaustion of rights on the basis of the putting of the goods on the market. The balance of convenience lied in favor of the Plaintiffs as the Plaintiffs would be more inconvenienced if the Defendants were allowed to run such a market of parallel importation to the detriment of the Plaintiffs.

LATER ON WHEN THE MATTER WENT FOR APPEAL, QUESTION AROSE:

Whether the Indian trademark act 1999 adopts the Principle of International exhaustion of Rights?

The Division Bench disagreed with the standing of the Single Judge the division bench observed that the single bench court has committed an error by concluding that the phrase ‘lawfully acquired’ in Section 30(3) meant ‘acquisition by consent for the purposes of import’. The Division Bench said that it is an incorrect interpretation of the section. The single judge interpreted that acquisition has to originate from the domestic market itself, where the trademark is registered and not from anywhere else but the court of division bench is of opinion that there is no law that stipulates that goods sold under a trademark can be lawfully acquired only in the country where the trademark is registered. As per the division bench, Trade Mark Law is not to regulate the sale and purchase of goods. It is to control the use of registered trademarks/Trademark registration lawyers in Ludhiana

In the appeal case, the trademark legislation in the EU, UK, Australia, Brazil, Turkey, Singapore, and Hong Kong were also discussed. The Division Bench stated that the statutes of foreign countries clearly indicate whether international exhaustion applies or otherwise. Therefore the reliance on these provisions to clear the ambiguity in the existing Indian provision is of no use.

Division bench supported the order of single bench with respect to the expression “market” that it is not clear that the expression market refers to what meaning, does it imply domestic or international market? Thus the division bench goes with the opinion of the apex court saying that it is the logical conclusion.

The Bench said that section 30(4) recognizes the principle in a limited sense by curtailing the right of the proprietor to prohibit further sale Section 30(4) gave a right to the registered proprietor of the trademark/best trademark lawyers in delhi to oppose the further sale of the goods.

As per the case even in the absence of a statutory provision, the registered proprietor of a trademark would have the right to oppose further dealing in those goods inasmuch as they would be the same goods improperly so-called, or to put it differently, if a physical condition of goods is changed, it would no longer be the same goods. But, sub-Section 4 of Section 30 is not restricted to only when the conditions of the goods have been changed or impaired after they have been put on the market. The Section embraces all legitimate reasons to oppose further dealings in the goods.

Thus, changing condition or impairment is only species of the genus legitimate reasons, which genus embraces other species as well literature provided with the product. This could only happen in cases where goods have to be imported from a country of manufacture or a country where they are put on the market thereof and then imported into India. Only then would there be a difference in the language of the literature provided with the product; the difference in services and warranties in the country from where the goods are imported by the seller and the country of import i.e. the manufacturer’s warranties not being available in the country of import; the difference in quality control, pricing, and presentation as also differences in advertising and promotional efforts. This was also an indication of India adopting the Principle of International Exhaustion of Rights in the field of the Trade Mark Law. Hence, the market contemplated by Section 30(3) of the Trade Marks Act 1999 is the international market i.e. that the legislation in India adopts the Principle of International Exhaustion of Rights.

Finally, The Division Bench has partially allowed the appeal. Court set aside the restraining order of the single bench; appellants were allowed to import the printers, ink cartridges/toners bearing the trademark Samsung/ SAMSUNG and selling the same in India.

the order directed the Appellant to prominently display in their showrooms that the products sold were imported and that the Respondents do not provide any warranty or after-sale services over such products.

Although the both single bench and division bench of the High Court has taken contrasting views the matter is far from over till the Supreme Court decides the same one way or the other. We need to wait and watch till we reach a conclusion on the principle of exhaustion of rights.