You are here:
HomeUnique Patent Law Provisions in India 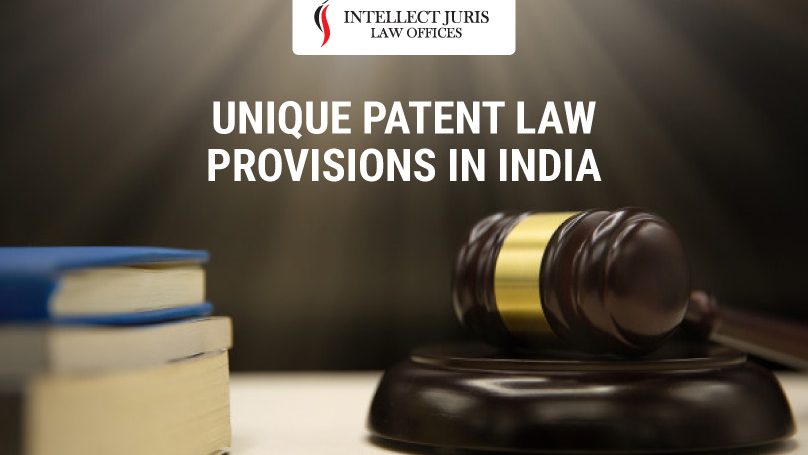 We always encounter the term “Patent” and its law, but most of us are not aware of the same. In the contemporary scenario, many countries are very strict about the patent’s rights. In the context of India, some unique patent laws in India have been implemented. Therefore we must know the patent law in India. The concept of patent in India has its own historical background. The duration of patent grant in India is 20 years, and it means a lot because during this period of time patent law offers a number of significant advantages to the inventor and entrepreneurs.

the patent system is facing current and emerging issues, therefore the global community for intellectual property rights are doing their best to resolve the issues. Also, Govt. of India strives to implement the best laws in regard to the patent, and securing the rights of inventors.

What is a Patent?

Patent in legal term is the right provided by the government to the owner for his/her invention, excluding others from using, selling, making, importing an invention for a limited period of time. Moreover, patents are granted for significant improvements on previously invented items. The concept of patent in India is not new, It has started in 1911, when the Indian Patents and Design Act, 1911 enacted, and today’s Patents Act, 1970 is effective since the year 1972, along with few amendments in existing law related to patents in India.

The duration of patent grant in India is 20 years which is considered from the filing date of application.

Utility Patents: This patent basically deals with new machines, chemicals, and processes and grant complete authority to the inventor as the existing law.

Design Patents: The design patent provide legal protection to the design of manufacturing objects, or uniques visual qualities of a manufactured item.

Plant Patents: A plant patent is generally an intellectual property right that protects the new and unique key characteristics of the plant from being sold, copied or used by any other.

What is Patent Law?

Patent law is a sub-category or branch of intellectual property laws that primarily deals with the new inventions and provides immunity to inventors for their own inventions. The rights of inventors are safe under this law. The main objective of patent law is to encourage new products by providing legal immunity and the right to use and earn a profit from their inventions. In the case of patent infringement, the inventor or patent holder can challenge in a court of law. While drafting the Patent law, Govt. of India has introduced unique patent laws in india.

In general, a patent can be granted if an invention is not a natural object or process, a new one, useful and not obvious.

As we know that the concept of patent in india is now new but some important features are added in the patent law of India. Let’s discuss unique patent law provisions in India, which make it a powerful one of patent holders.

Indian patent law provides an excellent opportunity for foreign applications that enter Indian jurisdiction through the PCT route. In the starting years, it was not possible to make amendments to the specifications during the time of national phase entry but after 2016 Govt. of India has made few changes in the patent law and allowed the same. The amended provisions become a boon for applicants to save excess claim fees.

Section 8 of the Indian Patents Act

After filing of the application, it would be better to check the compliance with section 8 of Indian Patent Law that is to be read with Rule 12 of the Patent Rule. Section 8(1) is to be read with Rule 12(1), 12(1A), and 12(2) where the applicant has to disclose the little information in regards to patent. All the details should be provided to the Indian patent office. And the same must be provided at the time of filing of a patent application or within a time-frame of six months. The information may include the following such as application number, application status, application date, country name, publication date, and grant date. And in the case of 8(2) read with 12(3) the details should be furnished (i) claims allowed and (ii) information related to any objection raised in the patent application. And for this time-frame is also six months.

This is another best provision in our unique patent laws in India, which force to the implementation and requirements of the working statement. As per this provision, the applicant must have to submit a working statement clearly stating the extent of the working of a patent every year. The objective of this statement is to ensure that patent is being commercially used at its peak, and serving the intended purpose. This provision prohibits undesirable consequences and recommends applicants diligently comply with this provision

Now we’ve gone through the unique patent laws in India, and you’ve been familiar with the following important provisions made under the Patents Act, 1970.